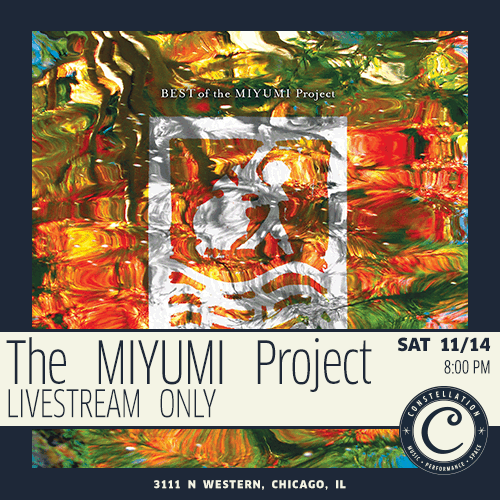 This concert will be livestreamed on Constellation Chicago’s Youtube channel. Please support the artists by purchasing a donation-based ticket if you are watching at home.

The MIYUMI Project is one of the longest standing amalgams, drawing upon the aesthetics of Japanese traditional music and Chicago’s creative jazz and experimental music scene. MIYUMI Project marks its 25-year history this November with the release of Best of the MIYUMI Project, a double-LP collection on FPE Records, and their first time on vinyl. Tatsu Aoki will be joined by Mwata Bowden, Coco Elysses, Jamie Kempkers, and Kioto Aoki, for this streamed concert to celebrate the album release.

2020 has been a memorable, if nightmarish, year thus far. Though COVID-19 has turned our world upside down and made what we once took for granted as “normalcy” a long distant memory, there’s also been the Black Lives Matter movement which has gained a strong foothold in our collective consciousness through demonstrations demanding equal, fair treatment – and justice. The global #BLM protests have uniquely united Americans and citizens of the world in a way that music and few other causes or activities have in the past.

One of 2020’s more notable accomplishments to happily reflect upon (we all could use some good news these days!) is the 20th anniversary of Japan-born bassist Tatsu Aoki’s The MIYUMI Project, one of the first Asian American / African American collaborative music projects which fuses the Japanese taiko drumming tradition with first class improvisers (many to most heralding from Chicago, where Aoki has been based since the late ‘70s). The group’s eponymously titled The MIYUMI Project was released two decades ago and has since forged a very special Afro-Asian musical hybrid. And to celebrate and commemorate this trailblazing (and still active) band, FPE Records will release Best of the MIYUMI Project, a double album of cherry-picked outstanding selections from the band’s vast discography as well as a live bonus track of previously unreleased material.

Creative music has historically always provided a platform for uniting its participants, not only relying on but encouraging individuals with unique backgrounds and disparate traditions. It is in essence a universal language where everyone involved can communicate, have constructive discourse and be on equal footing. Witnessing the spontaneous dialogue of a group of musicians creating on the spot is quite literally the democratic concept and process in action. Jazz has seen various distinct developments, fusions of different traditions, over the course of its history. From jazz’ Bossa Nova phase, based on American jazz and Brazilian music (e.g. Charlie Byrd, Laurindo Almeida, Stan Getz, Antonio Carlos Jobim, et al.), to the Jazz/Rock fusion era which incorporated rock’s electric instruments, amplifiers and rhythms with jazz improvisation (e.g. Miles Davis’ Bitches Brew era) – jazz has always had an open mind with open ears.

During the ‘70s Aoki was an underground Tokyo experimental artist interested in the American avant garde and influenced by a fascinating cross-section of bassists – from Charles Mingus and the Art Ensemble of Chicago’s Malachi Favors, to rock ‘n rollers such as Kenny Gradney (Little Feat), John Paul Jones (Led Zeppelin) and Dee Murray (Elton John). Moving to the U.S. from his native Japan in 1977, eventually to Chicago in 1979, he would work extensively with Windy City tenor saxophone legend Fred Anderson. In 1997 Aoki’s collaboration in the Power Trio (At Unity Temple, Asian Improv) with two members of the lauded AACM (Association for the Advancement of Creative Musicians) – woodwind specialist Mwata Bowden (one of Aoki’s longest musical associations) and drummer/percussionist Afifi Phillard (Sun Ra alumnus and Aoki mentor) – marked the unofficial inception of his MIYUMI concept.

The MIYUMI Project was named after the bassist’s third child. “Every time my kid was born, I made an album for each of them,” said Aoki, “but when Miyumi was born, instead of producing an album for her, I named the whole band after her because you know how immigrant families come to America and you sort of have this identity debate about who you are: the longer you stay you become an American, and eventually – in my case – you become Asian-American. By the time she was born I realized my family was now post-war immigrant Japanese American / Asian American. So to commemorate that awakening and awareness I named the whole band with this concept.” From the group’s first album the taiko drumming influence was an undeniable element, Aoki infusing Japanese-influenced aesthetics of accompaniment within the rhythm section, carrying his concept of time into, through and underneath the music as an essential and, as importantly, natural thread. An integral part of his rhythm section, Aoki as bassist has shown empathy towards the drum traditions of Japanese taiko and jazz, and his music and approach incorporates the drummer languages of each. Best of the MIYUMI Project reminds us that even as our society seems to be falling apart at the seams, there are those who have been tirelessly putting in the work to knit it all together.

Best of the MIYUMI Project will be available November 20, 2020 in deluxe gatefold double LP, double CD, or digital editions.