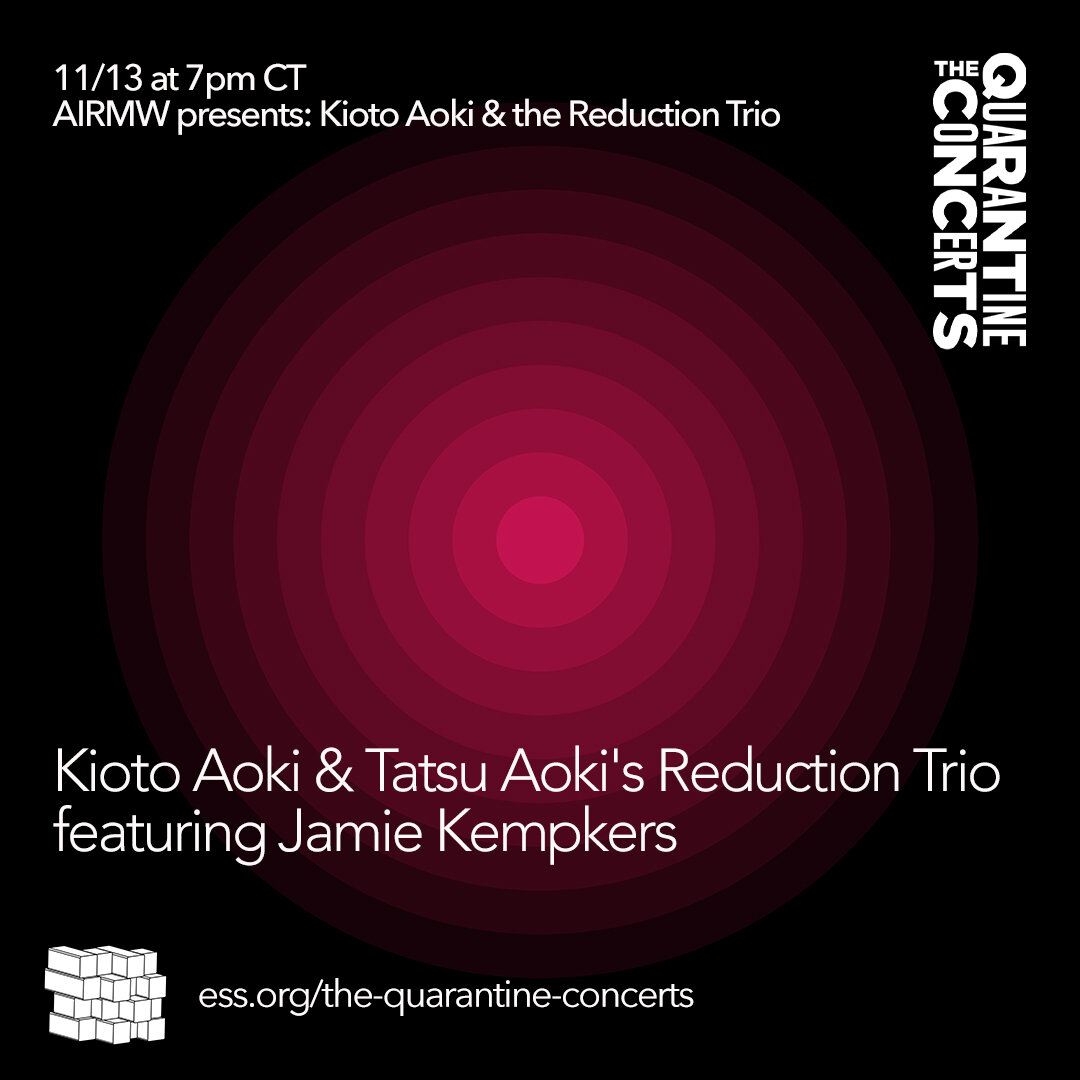 This performance is part of The Quarantine Concerts hosted by the Experimental Sound Studio.

Jamie Kempkers studied cello at Hope College in Holland, MI. He moved to Chicago in 2001 where he began collaborating with Jonathan Chen on many experimental projects. A few years later he was invited to join Tatsu Aoki’s Miyumi Project and has been a proud member ever since. Jamie continues solo and collaborative work in Chicago which he considers a great pleasure and a great privilege.

Tatsu Aoki is an artist, composer, musician, educator and a consummate bassist and shamisen Lute player. Based in Chicago, Aoki works in a wide range of musical genres, ranging from traditional Japanese music, jazz, experimental and creative music. Born in Tokyo, 1957 into the Toyoakimoto artisan family, a traditional house for training and booking agents for geisha. Aoki was part of his family’s performance crew from the age of four. By the early 1970s, Aoki was active in Tokyo’s underground arts movement as a member of Gintenkai, an experimental ensemble that combined traditional music and new Western forms. In 1977, Aoki left Tokyo and is now one of the most in-demand performers of bass, shamisen, and taiko, contributing more than ninety recording projects and touring internationally during the last thirty-five years. As Executive Director of Asian Improv aRts MidWest (AIRMW), an Asian American cultural arts presenter organization, Aoki has initiated and managed several programs to advance the understanding of traditional arts and community through the arts.

His Miyumi Project ensemble was chosen as the official musical presenters for the groundbreaking and unveiling of Yoko Ono’s installation, “SKYLANDING” in Chicago’s own Jackson Park; which also resulted in the group recording the album “SKYLANDING”, produced by Yoko Ono. In 2017, the group contributed their unique vibe to the soundtrack of the Japanese American Incarceration film documentary: “And Then They Came for Us”, and released a corresponding album. In May of 2018, Aoki was honored as the first recipient of the “George Award”, for his years of support, recording, and performance with renowned American Jazz and soul guitarist George Freeman. This year (2020), he received the United States Artists Fellowship for Traditional Arts and also the Illinois Arts Council Fellowship Award for Ethnic and Cultural Arts.

Kioto Aoki is a taiko artist, descending from the Toyoakimoto performing arts family in Tokyo with roots dating back to the Edo period. Studying under her Tokyo-born father, Kioto is carrying on the artistic family lineage in Chicago as sole professional taiko artist in the city. She has been performing on stage since the age of 7 and also plays shamisen and tsuzumi. Kioto plays in both traditional and contemporary musical contexts and is active within the experimental and creative music communities in Chicago and the Bay Area. She also leads the National Gintenkai Project – the performance unit within Tsukasa Taiko, the Japanese drumming program at Asian Improv aRts Midwest.

Kioto is also a visual artist and educator using the material specificity of the analogue image and image-making process to explore modes of perception as a politics of vision. Her photographic work oscillates between the still and the moving image, attentive to the apparatus of the human eye and the camera; while installation and artist book works engage mechanisms of structural tangibility and site-specificity. Forming a rhetoric of nuanced quietude, her practice considers the intimacies of vision through the experience of sight from inception through presentation.

Musical projects include Yoko Ono’s SKYLANDING, Tatsu Aoki’s The MIYUMI Project, The Reduction Ensemble, and the Taiko Legacy / Reduction series at the Museum of Contemporary Art Chicago. Kioto is also a multi-year Ethnic and Folk Arts Master Apprentice Program Awardee from the Illinois Arts Council. Her solo taiko album produced by Asian Improv Records is to be released Spring 2021.